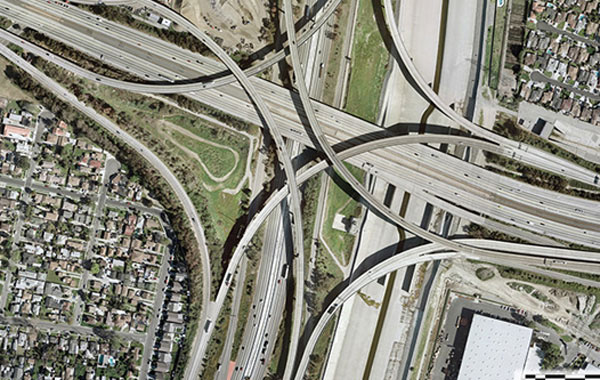 WES was contracted to perform field surveys and right-of-way engineering services for the heavily developed alignment. The prime contractor and their team of engineers and technicians were engaged to complete a major corridor study of the I-710/Long Beach Freeway. This study analyzed traffic congestion and other mobility problems in this corridor and assisted in the development of timely, cost-effective transportation solutions.

Highly-accurate GPS survey control network was developed which was used for the aerotriangulation adjustment. Color orthophotography, digital terrain model (DTM) and 1′ contour-interval design-scale topographic mapping for a 24-mile section of Freeway were produced. The complex project encompassed the detailed mapping of numerous highway and local street interchanges, including: SR1, I-405, and the I-105. The preliminary right-of-way engineering effort included the recovery of monumentation and calculations of the existing right-of-way from found evidence, Caltrans right-of-way Maps, Los Angeles County tract maps and flood control maps.